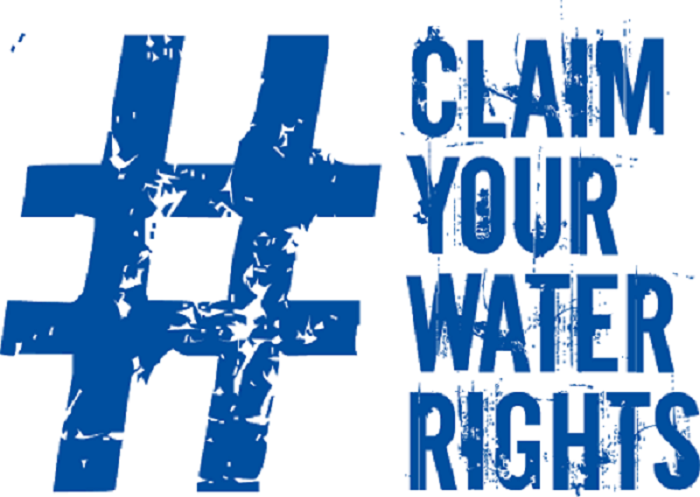 #ClaimYourWaterRights Access to clean and safe drinking water is a fundamental human right. However, across the globe, the rights of over 2.2 billion people who do not have access to this life-saving resource, are being daily violated. Recognizing this rights violation, End Water Poverty, in collaboration with its coalition members, initiated the #ClaimYourWaterRights campaign to sensitize citizens and duty bearers (political leaders and state water service providers) on human rights to water, whilst also mobilizing citizens to stand up for their rights.

Hope Spring Water Charity Foundation, will be collaborating with other local civil society organizations and key stakeholders in Nigeria water sector, to implement this campaign in Nigeria. This campaign will be the highlight of the 2020 Water Action Month.

ClaimYourWaterRights is a mass mobilisation campaign that aims to awaken people (especially young people and marginalized groups) to the injustice of their situation and spur them to claim their human rights to safe water and sanitation.

Why young people and marginalised groups?

In many countries, young people offer the best hope of lasting change: informing them of their rights can help secure future generations’ access to safe water and sanitation.

Marginalised groups often do not know or feel that they have legal rights and the power to challenge the denial of these rights.
#ClaimYourWaterRights will inform youth and marginalised groups how to directly hold service providers accountable.

While youth and marginalised groups are our primary focus, we will be engaging community members in target locations where we operate, while also embarking on a massive online campaign.

The United Nations General Assembly recognised safe water and sanitation as a human right on 28 July, 2010. In 2015, 193 countries strengthened their commitment to realising universal access to safe water and sanitation by 2030 when they adopted the UN Sustainable Development Goals (SDGs). Nigeria is a signatory to this treaty and also a signatory to the African Commission on People and Human Rights , which recognizes access to safe water as a fundamental human right.

Most countries have incorporated human rights obligations into national laws and constitutions. However, in Nigeria, human rights to water, which was explicitly recognized in the 2016 National WASH Policy has not been replicated in the National Water Resources Bill, that is currently being reviewed by the National Assembly.

We have just ten years to achieve universal access to water and sanitation (SDG 6). We have no time for false promises. We need urgent financing and delivery of services. Globally, Around 2.2 billion people lack safe water while 4.5 billion people do not have safe toilets. In Nigeria, over 55 million people lack access to safe water. This is not an inconvenience; it is a grotesque injustice.

The human rights are the best legal protection people have.

As duty-bearers, governments and any third party contracted to provide water and sanitation services are legally obliged to fulfil people’s human rights. As rights-holders, people have the power to challenge the denial of these rights. Yet many people are unaware of their rights due to lack of education, poor communication or apathy. #ClaimYourWaterRights aims to awaken people to the injustice of their situation and spur them to act. Even if people do not comprehend the legal implications of human rights, they often understand them as persuasive moral rights.

In addition, using human rights allows people who might be considered ‘non-citizens’ (nomads, refugees, migrants), minorities (tribal, religious, sexual) and those living in informal settlements, slums or ghettoes to hold governments accountable for realising their right to safe water and sanitation. This is particularly important at a time of increasingly divisive nationalist politics that seek to deny minorities their rights.

The Enugu State #ClaimYourWaterRights (CYWR) team paid an advocacy visit to the state ministry of water resources and the state water corporation, both of which are responsible for provision of clean drinking water to Enugu citizens. Enugu state is commonly referred to as the capital of South East Nigeria but lack has been plagued with perennial water scarcity. According to the assessment by WaterAid Nigeria, 2.37 million (53.8%) of Enugu residents lack access to clean water. The research also showed that lack of access to water, sanitation and hygiene (WASH) contributes to almost 1 in 10 children under age 5 in Enugu being stunted and a major contributor to poverty prevalence in Enugu State. Despite several funding interventions by the state government and international development organizations (including the World Bank), millions of people in Enugu State are still being denied their rights to clean drinking water.

Meeting objectives:
Sensitize water utility providers and government officials on human rights to water and the essence of the #ClaimYourWaterRights campaign

Key Discussions and outputs from meetings:
Meeting with the SPA
The CYWR team gave a brief overview of the #CYWR campaign and highlighted some of the grotesque injustice faced by Enugu State residents regarding access to clean drinking water, using case studies of some of the communities visited. The key case study being the lack of water supply to Emene, which is notable as the states’ industrial layout and plays host to several companies and institutions, such as Innoson Motors, NNPC oil and gas depot, Enugu International Airport, including notable healthcare facilities, schools and markets.

He confirmed that he is aware of the poor water supply situation in Enugu State and since his resumption of office 3-4 months ago, he is working with his team to ameliorate the situation.

The SPA pointed out that power outage has been a major challenge to supply of water in the state
As a first step to revitalizing the water sector in Enugu State, the SPA confirmed that the government will be declaring a state-of-emergency in the states’ water sector within the week.

He also confirmed that the government has approved funds for the rehabilitation of an abandoned water supply scheme (over 50,000 m3/day capacity) in 9th mile to reach more citizens that are not connected to pipe-borne water in Enugu. Rehabilitation works, which includes installation of solar panels as an alternative power source, will commence in February and completed within April to May 2020. The CYWR campaign coordinator emphasized that the project will be monitored by the CYWR team

The SPA further suggested a joint site visit to the various treatment plants in Enugu, so as to see first-hand, the challenges being faced in the sector.

He extended an official invite to the #ClaimYourWaterRights team to witness the state governments declaration of State of Emergency in Enugu State WASH sector.

The Campaign Coordinator of #CYWR, Mr Temple Oraeki, sensitizing the SPA on human rights to water

Meeting with Coordinator of Enugu State Urban Water Sector Reform Project
The CYWR team gave a brief overview of the #CYWR campaign and highlighted some of the grotesque injustice faced by Enugu State residents regarding access to clean drinking water, using case studies of some of the communities visited. The key case study being the lack of water supply to Emene, which is notable as the states’ industrial layout and plays host to several companies and institutions, such as Innoson Motors, NNPC oil and gas depot, Enugu International Airport, including notable healthcare facilities, schools and markets.

Engr. Charles Eze confirmed that the major setback faced by the state Water Corporation is the fact that it is not fully autonomous. Though, the state government remits 80% of the revenue generated by the corporation, monthly.

Other challenges pointed out include lack of adequate manpower, power outage, leakages,

He further stated that discussions are at an advanced stage with the French Development Agency (AFD) to provide a $50 million funding to revamp the corporation under the Enugu State Urban Water Sector Reform Project. The CYWR campaign coordinator emphasized that the project will be monitored by the CYWR team 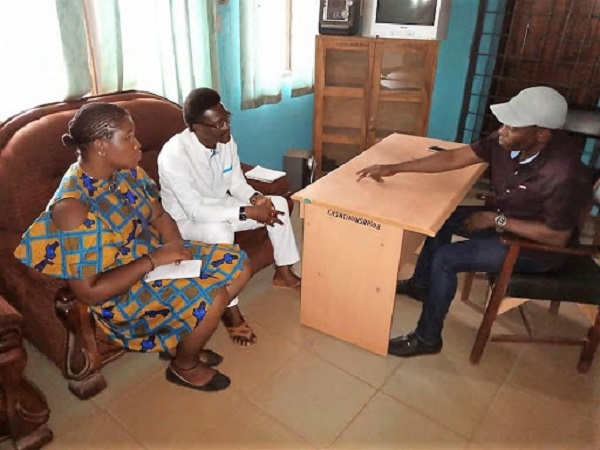 Engr. Charles Eze, explaining the situation of water supply in Enugu State to members of the #ClaimYourWaterRights campaign

Students of a public school in Emene, making use of the available sanitation site in their school 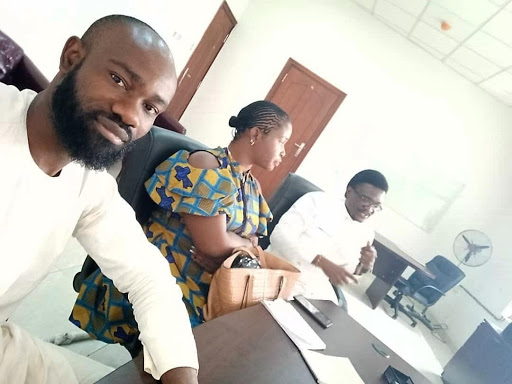 Members of the CYWR Team sensitizing the SPA on CYWR campaign

After State-of-emergency Declaration on WASH, What next for Enugu State?

In line with the Federal government’s plan to revitalize the WASH sector in Nigeria, Enugu State government, on the 23rd of January 2020, inaugurated an 18-member inter-ministerial committee on WASH and declared a state-of-emergency in its WASH sector. The committee comprised of experienced directors and heads of various state ministries and agencies such as health, water resources, justice, environment and Enugu State water corporation. The Civil Society Organizations (CSOs) were not left out too.

This declaration means the government have recognized the decay in the WASH sector and are ready to galvanized actions to revamp the sector.

Considering the poor WASH statistics in the state, there are two key outcomes expected from this declaration:

This declaration sets the pace for us to now amplify our various advocacy campaigns, such as the #ClaimYourWaterRights and the #CleanNigeria campaign in the state.

Following up with the declaration, Enugu State #ClaimYourWaterRight team, headed by Hope Spring Water, paid a visit to the Special Adviser (SPA) to Governor on Water Resources, Hon. Dubem Onyia, who heads the inter ministerial committee on WASH, to know the plans they have to improve water supply in Enugu State. The SPA confirmed the government’s commitment to ending water poverty in Enugu State, while stating that the government has already sprung into action to rehabilitate most of the water production and distribution networks in the state. In terms of advocacy and capacity building, he reiterated the need for collaboration with CSOs and development partners. The SPA also confirmed that the state’s WASH Policy which has lingered for long, would be passed into law before the end of January 2020.

It is no longer news that Nigeria is the Open Defecation capital of Africa, and only 16 Local Government Areas (LGAs) out of the total 774, have been certified to be open defecation free (ODF). Of the 16 LGAs that are ODF, none is in the south east. Therefore, following the declaration of state-of-emergency in Enugu State’s WASH sector, it is expected that the state will produce the first ODF local government in the south east. Hon. Dubem Onyia expressed his willingness to work with relevant partners to make it happen.

The #ClaimYourWaterRights team will be engaging the government at various levels to ensure the implementation of proposed plans in the state’s WASH sector. 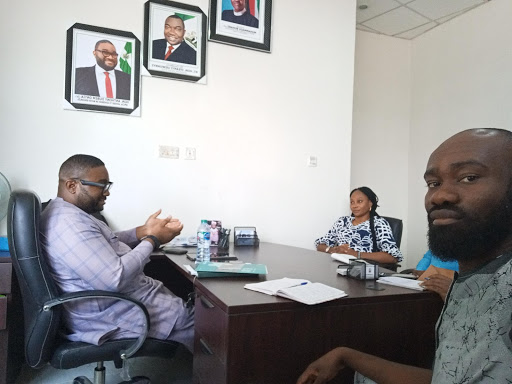 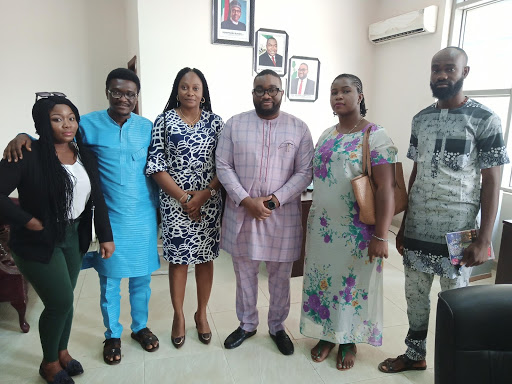