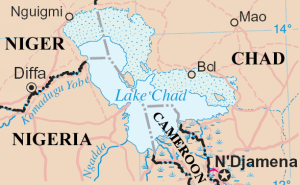 Lake Chad, which was once one of the largest lake in the world, is today a shadow of itself. Primarily the Logone River feeds the lake, which cuts across four countries; Nigeria, Cameroon, Niger and Chad. Recent statement by Ms Mede (Permanent Secretary, Nigeria Ministry of Environment), confirmed that the Lake which serves as the source of livelihood for the millions of people living around the region has receded from 33,000 km2 to 300 km2 (a shrink by 99%) in just about two decades. At this rate, the lake will be no more by 2020. The cause of this decline has been attributed to the effect of climate change, desertification and deforestation as well as over exploitation through damming, irrigation and pollution, by the increasing population migrating towards the region in search of source of livelihood.

A vast majority of the inhabitants in the region thrive on economic activities directly linked to Lake Chad. A staggering 60 million people are believed to survive on the Lake Chad ecosystem according to the European Space Agency (ESA). Fishermen needs the water to remain inland to keep the fish alive; the farmers on the other hand, take out water from the lake for irrigation while herdsmen depend on the lake water to keep their animals hydrated and alive. The present surge in malnutrition, water scarcity, water-borne diseases, insecurity and poverty in the region are clear evidence of the impact of the disappearing lake. 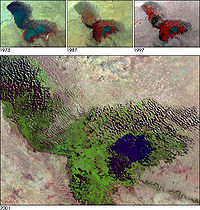 In Nigeria, Lake Chad is located in the North-east region, same region that has been at the receiving end of the Boko Haram insurgency. As the source of income for the inhabitants in the region is gradually fading away due to the shrinking water in Lake Chad, the youths are becoming jobless and the poverty level in the region is escalating. In addition to all these negative impacts of the drying lake, a ripple effect of worsening security condition is inevitable, as youths in the region are highly vulnerable to enticement and recruitment by the Boko Haram insurgents with a promise of better life. The recent directive by the Federal Government of Nigeria to the Ministry of Environment to revisit the 1920 report on Lake Chad is not the first of the many attempts that have been made in restoring the Lake Chad to its original state. In 2012, a Memorandum of Understanding was signed by the 4 member countries bordered by the Lake, towards the implementation of a water transfer project spanning from 2013 to 2017, at an estimated cost of $14.5 billion. The success of that project can only be measured by the present condition of the Lake, which is clear for all to assess.

A more assured means of replenishing the water in the lake, as proposed by many stakeholders, is the diversion of water from the Ubangi River in Central African Republic. However, to keep the water in the lake, planting of trees and provision of clean cooking alternatives for firewood, are critical measures to protect the lake from vanishing. Abstraction licensing and implementation of an integrated water resource management system is required in the River Basin.

In summary, to keep our lives safe, our water must be safe; to keep our water safe, we must prepare for climate change mitigation and adaptation.