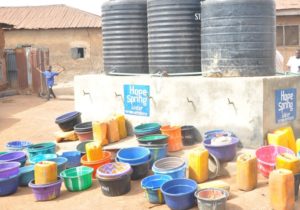 Until the intervention of Hope Spring water in Kongbari community in Okelele area of the city of Ilorin in Nigeria, the most populous country in Africa, regular clean water supply to many families meant five to ten minutes access to a sixteen year-old hand-pump bore-hole every other day.  To  meet up for the huge shortfall in the water supply needs of such families, their women and children have no other choice but to trek for several miles and eventually queue for hours in the searing Ilorin sun  to get water to drink, cook, do the dishes and other such  domestic chores.

The reality of daily life in communities like Kongbari has been repeatedly presented by development experts.  That reality is that shortage of clean water supply is a challenge which continues to face many rural and urban communities in Africa and most of the burden of water shortages fall on the belaboured shoulders of women of affected communities and their children. The warning that a next big war in Africa may be fought over the sharing of resources of the Nile also resonated in Kongbari where the less affluent families have some resentment to the more affluent members of the same slum community because of the difference in the time allotted to the families to fetch water at the bore-hole  because they contribute different money to the pool of money used to maintain the bore-hole without recourse to the parameters such as population of the families to determine their need.The intervention of Hope Spring Water in Kongbari has certainly engendered better harmony within the community and indeed within individual families.

Government must wake up

Communities like kongbari in Nigeria find themselves in this kind of condition because expanding population of cities like Ilorin have not been complemented with expansion of municipal water supply. Since the twenty-first century dawned, affluent individuals and local councils have been sinking boreholes in Ilorin neighbourhoods. The people of Kongbari had a hand-pump borehole presented to them some decade and a half ago by their local council. Sixteen years on, the efficiency of water supply in the community for domestic use   plummeted to an all-time low on account of the age of the hand pump machine and the expanding population of the community.

Heroes in their right

The Women and children of Kongbari spend several hours at the borehole labouring through the searing Ilorin sun as they do through the danger laden darkness of the night and the very early mornings.

Hope Spring’s decision to intervene in Kongbari was critical, not just in reducing the stress and dangers which Kongbari’s women and children were exposed to, the intervention also created opportunities for the women to have time for the pursuit of economic ends and opportunities for the children to study towards a brighter future. The effect of Hope spring’s donation includes improvement of the overall quality of life of the Kongbari population through improved communal harmony, strengthening of familial ties, prevention of diseases and certainly reduction of the burden of poverty.

The instability of global economy almost stalled the Kongbari project. The project was muted at a time when the naira, Nigeria’s local currency was stable against the dollar. Oil prices were record high and that time and so was our optimism. Unfortunately, dark clouds started to gather around our vision for Kongbari and the hopes of the community were almost dashed when oil prices fell to record low around February.  Inflation consequently sky-rocketed and the project was suddenly an impossible mission. At that point, Miftah AbdulRauph , whom we had  contracted to carry out the  project ,crucially raised our morale when he vowed to continue with the project even if I meant a loss to him personally.

He insisted that the fact that Hope-Spring’s project in his home town was mainly sponsored by non-Nigerians was a challenge to him and that nothing he does to ensure that their help were not rendered in vain, would be too much.

Murtala Yinka Oyinloye was also of tremendous help to the success of Hope Spring’s Kongbari Project. Right from the arrival of Hope Spring in Nigeria, and throughout the project, he volunteered as a driver and also linked us to people who provided us with the right services at the right-price.  Hamidu Mallum and Jimmy Oladele also provided us with many invaluable services pro-bono. We are indeed very grateful to them as we are to other Such people of good-will.