For a densely populated community, like Ngwogwo in Ishiagu LGA, the Ivo River is their major source of water for various domestic purposes. It is common sight to see barrels of empty water containers lined up outside houses, awaiting rainfall. In partnership with Haske Water Aid and Empowerment Foundation and the support of fundraising efforts by Nan Goldie family, Hope Spring Water was able to sponsor the project for the drilling and equipping of 5” UPVC Hand-pump borehole, drilled to a depth of 50 metres in Ngwogwo community. 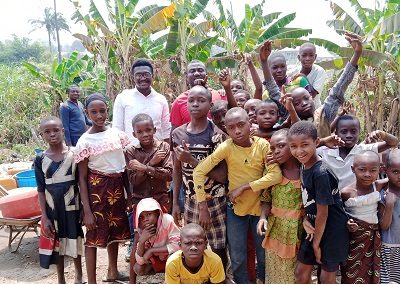 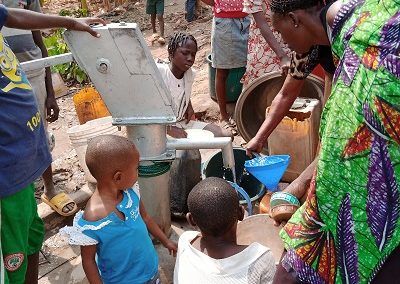 Up to 3,000 lives directly impacted

A Highly populated community with about 5,000 inhabitants, the community is in dire need of clean water to curb outbreak of water-related diseases which is common in the community, mainly as a result of drinking contaminated water. 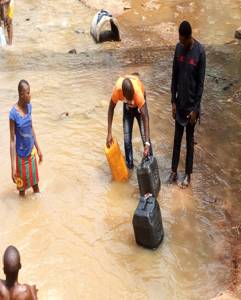 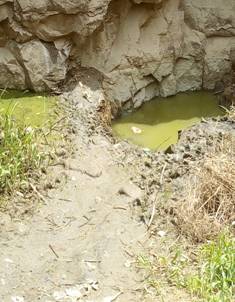 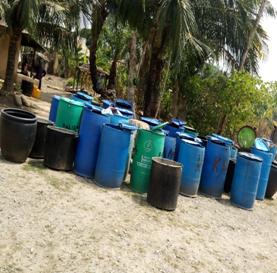 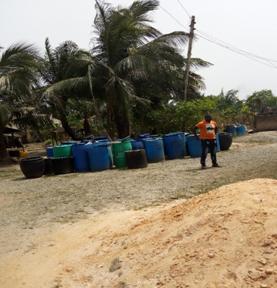 Our preliminary visit to the community confirmed the plights of this blessed but impoverished community. Enroute the site of the river to assess the water need of the community, almost every household, was seen to have empty gallons and water containers stationed, in anticipation of rainwater, to ease the stress of the daily journey to the river to fetch water.

On arrival at the site of the river, the team witnessed first-hand, the ordeals of the community members. Men, women, children, including the elderly, were seen struggling to make the best use of the only water source available to them in the community. Due to utilization of the river to meet the multiple water needs of its users, and prevent incessant abuse witnessed by the joint utilization of the river for all gender, the river was divided into male and female section. The female section had women and girls bathing, washing and fetching drinking water from same source whilst the male section also had men and boys doing same in their own segment.

So as to avoid the daily visit to the river, most families visit the river during weekends, and ensure they get all the water they will need for the week, including doing their laundries and washing the leaves they need for preparing local soup and meal. 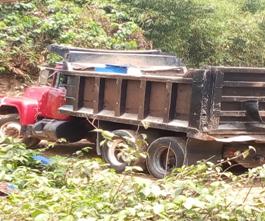 The team interviewed a young girl who was seen carrying gallon of water from the river to a larger water container, stationed in a stand-by truck. She confirmed that accessing water is a major challenge in the community. She further confirmed that, just like other families, she was there with her siblings to fetch water and do their laundries.

The survey team observed that most families adopt a particular strategy at the river site, to get water. One person takes charge of fetching the water from the river, after which he or she hands over the filled container to another person who takes the water-filled container to another family member stationed in a nearby truck, containing a much larger water containers (mainly drums). This sequence continues until the drums of water in the truck, is filled. The truck is then used to transport the drums of water to the respective homes. These trucks are usually rented by families. Therefore, apart from the dissipated energy and time involved in accessing water, most families also spend the little income they have, in paying for trucks that will transport the water from the river to their respective homes. Not to forget that this same river is highly polluted from mining activities that go on in the community and other domestic activities (such as bathing and washing) carried out in the river.

Hope Spring Water initiated a fundraising campaign to donate a handpump borehole to Ngwogwo community. Adverts were placed to request for proposals from borehole drillers in Ebonyi State. After screening, Joegraf Ventures was awarded the contract and a geophysical survey was carried out to ascertain the best site to cite the borehole.

In partnership with Haske Water Aid and Empowerment Foundation and the support of fundraising efforts by Nan Goldie family, Hope Spring Water was able to sponsor the project for the drilling and equipping of 5” UPVC Hand-pump borehole, drilled to a depth of 50 metres in Ngwogwo community. 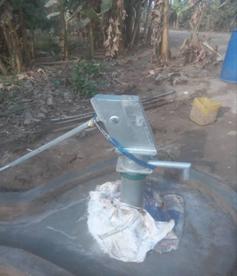 The borehole showed signs of being an artesian well, considering the high yield of clean water obtained on reaching the aquifer.

The joy of community members knew no bounds as they rushed in their numbers to fetch water from borehole even before installation of the handpump. 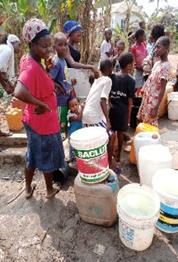 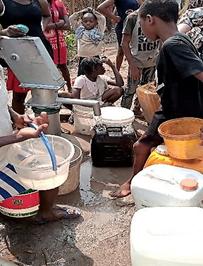 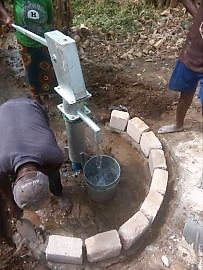 The immediate impact could be seen on the faces of members of community who were full of smiles and eager to get clean water from the borehole. The women sang praises, saying that the time spent on fetching water from rivers and streams would now be spent with the family. Children would go to school early and have safe water to drink without the risk of water-related diseases. Incidents of death from drowning, as well as rape, would be drastically reduced.

Hope Spring Water set up a WASH committee (WASHCOM) headed by the Youth Leader, Mr. Nnaemeka Ezenta. The committee will oversee the effective functioning and maintenance of the borehole.