Nigeria’s Open Defecation Menace: Where does the poo go?

The benefits of having access to clean drinking water source can only be fully realized when there is also access to improved sanitation and adherence to good hygiene practices.

When we talk about sanitation, we are talking about toilets and the practice of open defecation.

Open defecation is when people go out in fields, forests, open bodies of water, or other open spaces rather than using a toilet. In Nigeria, we have different names for it like “shotput”, and the likes. In fact, as at today, Nigeria is the open defecation capital of the world, meaning that Nigeria has the highest number of people that defecate in the bush or along the streets. Over 47 million Nigerians currently practising it. It will shock you to know that out of the 774 LGA in the country, only 20 are open defecation free as certified by the Federal Govt and none of them is in the south East. 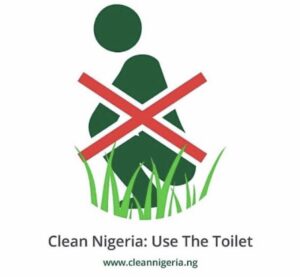 Open defecation is incredibly dangerous, as contact with human waste can cause diseases such as cholera, typhoid, hepatitis, polio, diarrhea, worm infestation and under nutrition. Defecating in the open is one of the leading devastating menaces to public health in Nigeria. UNICEF estimates that about 122,000 Nigerians, including 87,000 children under the age of five die every year from diarrhoea, intestinal worm infections, cholera, hepatitis, typhoid and other preventable sanitation-related illnesses.

It is worthy of note that poor sanitation is also costing Nigeria economically, Nigeria loses about 1.3% (N455 billion) of its GDP annually to poor sanitation as a result of illness, low productivity, loss of earning opportunities and other factors. Ending open defecation in Nigeria can mop up this economic loss.

One prevalent challenge to ending open defecation is not just erecting sanitation structures or providing clean and safe toilets but changing people’s behaviour from choosing farm fields, railways, motor parks, stadiums, highways, streets, roads, playgrounds, bushes, forests and water bodies, to using the toilets. Many rural dwellers, for instance defecate in the open, not necessarily because they do not have access to toilets but because of deep-rooted cultural practices. Three out of the four children interviewed by the #ClaimYourWaterRights team in Onuagba community of Enugu state confirmed that they defecate in the open, including one who said they have toilet at home but he still prefer to use the bush.

There is a need to adopt all necessary means to sensitize the public on the importance of sanitation and hygiene. It is not enough to provide clean and safe toilets but also to change behaviours as a means to bridge the gap between building latrines and their proper use.

Even those that have toilets, have you asked yourself where the faeces go after your pit or soak away is filled up and evacuated? Or do you just close the pit and dig another soak away pit?
One of the most important set of workers that have been instrumental in managing faecal wastes and reducing the practice of open defecation, are the sewage workers or sometimes we call them sanitation workers. Their work is so important but less recognized by both the government and the public. What if there were no sewage workers to come and evacuate your soakaway when it’s filled up? Have we considered where these sanitation workers go to dump these faecal wastes when they use their trucks to evacuate the filled soakaway? Have you thought about the stigmatization these workers face and how are you protecting their rights? 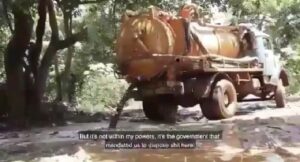 Discharge of sewage into a river

It is common knowledge that most times, the faecal wastes are being dumped in rivers and streams. However, what is not common knowledge is the debilitating impact of such practices on the health of people and the economy at large.
The #ClaimYourWaterRights team had an interview with the Enugu State Chairman of Faecal Sludge Evacuators to find out if the waste generated in the state are properly disposed and also discover if the state was on the path of ending open defecation.
According to him, In Nigeria, only few state governments are interested in the issue of sewage management. He stated that one of the locations where they dump the faecal wastes has been closed down due to several complaints that it contaminates the river used as the main source of water by community members. When asked about the status of the current location, he emphasized that there’s no connection between the current dump site and any river source, but was quick to reiterate that a proper treatment plant is needed at the current dumpsite. He said if the government could co-operate with them, a lot of revenue can be generated because currently organic fertilizers from faecal wastes are mostly used globally as opposed to chemical fertilizers.
Another sanitation worker interviewed highlighted the many challenges of sanitation workers in the state. Such challenges include bad road network to dump site, lack of adequate treatment plant, no provision of personal protective equipment, poor accessibility to funds to expand their business, amongst others.
It is pertinent to note that there is no end in sight to open defecation if relevant government authorities and private sector do not pay attention to sewage management in Nigeria. Owning and using a toilet alone would not end open defecation! It’s high time we addressed the challenges of the sanitation workers, regulate their activities and provide enabling enabling environment for “shit business” to thrive in Nigeria.