Waste management has remained a major challenge to the environment and health of humans. With an increasing population and more industries springing up, it means that more wastes are been generated and released into the environment, leading to pollution and spread of diseases, if not properly managed.

One of the natural resources that mostly suffers from this environmental pollution is our water resources. Rivers, drainage systems (what we call gutters) and other water bodies have become dump sites for wastes, from households and industries. 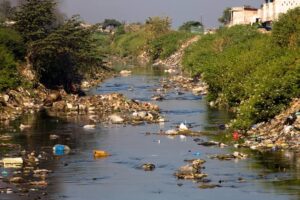 Growing up, I recall that whenever it was raining, most people bring out their wastes and dump in gutters with the hope that the flowing water will transport the wastes away from the earth or swallow up the wastes. But as I grew up and became environmentally conscious, I began to think, where actually do these wastes that we dump in gutter and rivers go to? Where do they finally end up? One thing we didn’t realize is that these wastes we dump for water to carry away, block the natural flow of water and at the end finds its way back to our door steps, when flooding occurs. Let’s not forget that some people use the rivers we dump this wastes, as their source of drinking water. So, we are directly poisoning our fellow humans when we use gutters and water bodies as dump sites for wastes.

The #ClaimYourWaterRights team had an interview with the co-founders of a private waste recycling company in Enugu state where they reiterated the impacts of dumping waste in our water resources.

Mr Precious Otubelu, Co-Founder of Green Axis Recycling, had this to say:
“Enugu populace source their water from rain, pipe borne water, wells, boreholes, streams, springs and tankers meaning the water used are generated from their immediate environment. Most of the wastes are disposed on the go, in gutters and water ways where the water used come from, hence majority of the water consumed are contaminated. Inability to put up structure to recover waste generated on daily basis is directly affecting the water we use”.

We have been emphasizing the issue of water scarcity in Enugu State, and blaming the state water corporation for not giving us pipe-borne water. But one thing we often don’t realize is that we are contributing to this water poverty in the state. The Ajalli water scheme that supplies water to Enugu metropolis, has its source from the Ajalli River. So, when this river is polluted and filled with wastes, the state water corporation will have to spend more resources in treating the water before it is been supplied to people at homes.

In Enugu State, the Enugu State Waste Management Authority (ESWAMA) is in charge of solid waste management in the metropolis. Despite their attempts to keep our environments clean, it’s still sad that we see heaps of wastes along the roads, markets, and drainage systems.

As far as we exist, we will keep generating wastes. How we manage the wastes is one thing we need to find a way around. We have a role to play and the government has a role to play too. Together we can put an end to the waste menace in Enugu State.