Partly to keep the readers of the Hope Spring Water blog informed, partly to keep up to date with what is happening in the world of WaSH, our versatile volunteer Evgeniy Gakaviy has just started a monthly blog post series called the “Water and Sanitation roundup”. In these posts, he shares excerpts from some of the leading WaSH news posts and articles he comes across in a given month. Here is Evgeniy’s second WaSH roundup, we hope you find it informative and/or useful. If you have WaSH-related articles, news or information you would like him to include in a future WaSH roundup, please use our contact page to get in touch with Evgeniy.

“India’s poor sanitation is harming millions of children. There’s no excuse” by Rose George in The Guardian highlights that there are 50 million children in India who do not have access to adequate sanitation.

“New Report: why water + sanitation is vital to end malnutrition” – WaterAid. You can download the full report and also view it as an infographic which shows how well water, sanitation and hygiene are integrated into different countries.

You can read more in the official report by WaterAid. 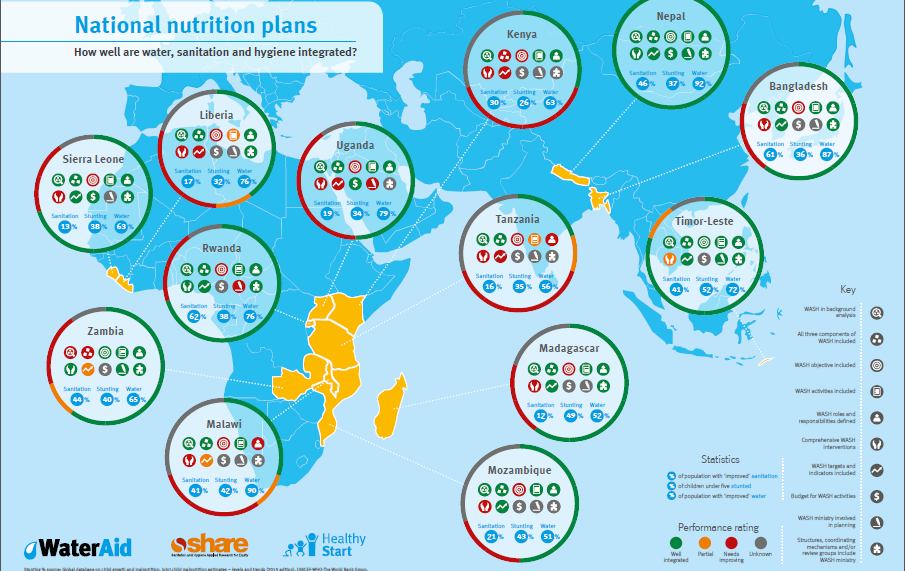 “A girl’s view of the 17 sustainable development goals – in pictures” by Anna Leach on The Guardian. This article contains 17 very beautiful pictures and a text describing the story of all those pictured. Different photographers from around the world captured photographs that illustrate this article.

“In the US, groundwater is the source of drinking water for about 1/2 of the population“ – USGS.

In the US ground water is the main source of the drinking water for about half the population. It can provide up to 50 billion gallons per day for agricultural needs, the author compares the water stored in the ground to money kept in their bank account.

People who have access to clean water do not thinkabout how this water was actually delivered to their home.

“Brazil may be the Owner of 20% of the World’s Water Supply but it is still Very Thirsty” – World Bank.

“Key differences are apparent in figures for national water coverage (82.5%), wastewater (48.6%) and real wastewater treatment (39%). Among the poorest 40% of the population, the percentage of households with toilets connected to the sanitation network rose from 33% in 2004 to 43% in 2013”

“Poor Water and Sanitation in Liberia” by Ethel A. Tweh in The New Dawn Liberia. Liberia is one of the poorest countries when it comes to clean water and adequate sanitation. According to the statistics, more than 50 percent of the health facilities in Liberia lack water and sanitation.

Health facilities need to be protected very well and the main idea of the Prince Craply (he Civil Society Organization chair on water and sanitation) speech is to provide clean water to health centres.

“Why a new water decade is key to meeting the world’s development needs” by Tiksa Negeri in The Conversation. Not all targets were met on schedule by the 2015 UN Millennium Development Goals. That is why the next decade is very important.

Since 1990, 2.6 billion people have gained access to clean drinking water. It means that more children spend time in education instead of collecting water however it does not mean that the work is done, there are still a lot of development challenges we face.

“If water is life, then the Lamina community is dead” – Timothy Ngnenbe on Graphic. The people of Lamina, the Nkwanta-North District in the Volta Region, do not have access to clean water and they need to walk more than 5 kilometres to the nearest water source.

This community has a population of only 700 residents, they are mostly food farmers and have to work very hard all day and then walk a long distance just to collect water.