Partly to keep readers of Hope Spring water blog informed, partly to keep up to date with what is happening in the world of WaSH, our versatile volunteer Evgeniy Garkaviy has just started a monthly blog post called Water and sanitation roundup. In the post, he brings you excerpts from some of the leading WaSH new and article he came across in a particular month.

Here is Evgeniy’s first WaSH roundup, we hope you find it informative and or useful. If you have a WaSH related article, news or information you will like him to include in future WaSH roundups, please use our contact page to contact Evgeniy.

“African leaders to put effort into water availability” by Iddy Mwema on Dailynews. During the 6th African Ministers Council meeting on Water, Sanitation and Hygiene, it was agreed to redouble efforts to make sure the African continent has clean water by 2030.

“How the Private Sector Can Help Us Reach Everyone, Everywhere With Clean Water” by Barbara Frost on Huffington Post. A year ago Millennium Development Goals were exchanged for Sustainable Development Goals. All world leaders signed a document focused on helping alleviate poverty through clean water, education and peace by 2030. WaterAid has announced a five-year partnership with Diageo to help some poor communities access clean water.

“3 steps to improve rural sanitation in India – a pathway to scale and sustainability” by Joep Verhagen on The World Bank blog.

According to the statistics, 600 million Indians who live in rural areas defecate in the open. The World Bank has provided a $1.5 billion loan to help them. The 3 steps to improve sanitation in rural areas are:

[/unordered_list]
“Powerful photos reveal Ethiopia’s worst drought in decades” by Jacob Hunt on Unicef AU blog. Ethiopia and its agricultural produce mostly rely on rain. In 2015 the rain failed to irrigate the country and Jacob has completed a post with moving pictures where you can see what does this drought means for Ethiopia, children and animals…

“The World Bank Group Climate Change Action Plan” on World Bank blog. This post contains a great infographic where you can read key facts such as:

“Climate change could push more than 100 million additional people into poverty by 2030“.

“The world is not doing enough to tackle a worldwide epidemic that is leaving more and more people suffering from diet-related conditions such as stunting, anaemia, heart disease and diabetes”.

“160 years of clean drinking water in Hereford celebrated” by Jessica Phillips, in the Hereford Times.  Being a water charity based in Herefordshire, this news just could not escape our attention.  We were excited to learn that what we are trying to help developing communities achive in Africa today, was achived in Hereford 160 years ago. This article promoted Temi Odurinde to write briefly about this celebration and he started compiling what he calls Herefordshire water facts.     In Jessica Phillips article, she traced the origin of  piped drinking water in the City of Hereford to just before 1856,  when Hereford citizens took their water directly from the River Wye.

To celebrate this anniversary Chris Jones from DwrCymru(Welsh Water) unveiled a plaque at Hereford’s Waterworks Museum.

“This doctoral student is building public toilets in India that also provide clean drinking water” by Jennifer Goren on PRI. This article tells about a doctor, Anoop Jain, who graduated university in 2009 and then got his first job as an engineer.

During his work he found an organisation that builds public toilets in India. Now he is building toilets so everyone can use them safely. Between 3,000 and 4,000 men, women and children use their toilets every day. They also provide over 100,000 liters of safe drinking water each month.

“Where are the world’s most water-stressed cities?” by Katherine Purvis in The Guardian. ||”Water stress”refers to cities where the human or ecological demand for water is not met.

In this article you can find such cities as São Paulo, Lima, Kuwait City, Abu Dhabi and Doha.

“Africa’s river run to 2030: making universal access to water and sanitation a reality” by Apollos Nwafor on WaterAid. Just ten months after the Sustainable Development Goals were agreed upon, last week was Africa Water Week. The main task is to provide clean drinking water and adequate sanitation for African people by the end of 2030. 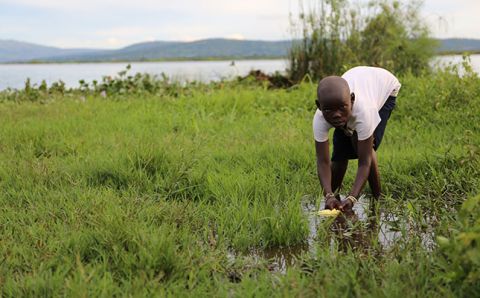 Although it is only the first year of the SDGs, the journey to sustainability by 2030 has begun.