World toilet day 2019 – a little can make a big difference 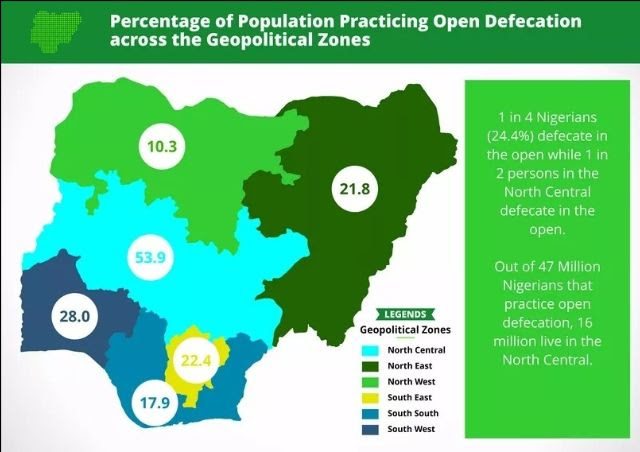 Map of open defecation in Nigeria

World toilet day is a UN initiative, observed internationally on November 19 to draw the attention of the world to the importance of sanitation and accessible toilets and to tackle sanitation problems globally. According to world bank data, one in four Nigerian, defecate in the open.

In Nigeria, about 87,000 children below the age of 5 die from diarrhea related complications.

The highest percentage of open defecation comes from North Central of Nigeria and only 13 out of 774 local governments are open defecation free in Nigeria. The situation is so bad that most people don’t feel bad about it, Some defecate openly anytime of the day, several ODF campaigns are organised by the government and organisations to end open defecation, however there are a lot more to be done. 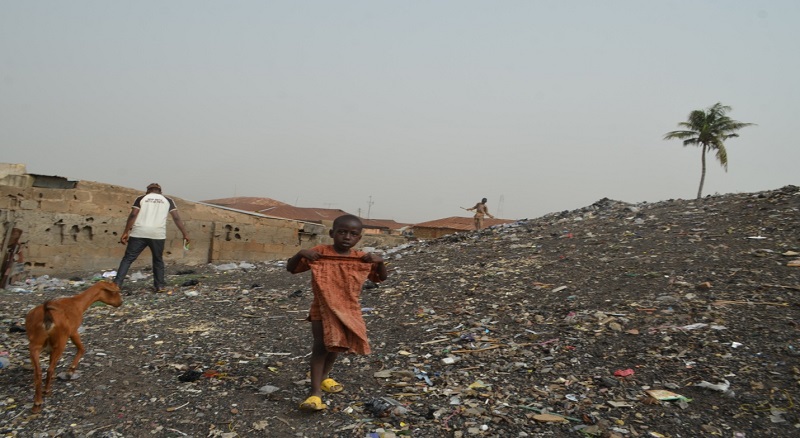 In November 2018, President Buhari declared a state of emergency on Nigeria water, sanitation and hygiene sector The “Clean Nigeria: Use the Toilet campaign” is aimed at coordinating interventions to end open defecation in Nigeria by 2025. The citizen-led campaign is multisectoral and can only be effectively implemented through a concerted effort of all key stakeholders in the WASH Sector. At the Global citizen world water day event, held in Abuja on March 19th, several stakeholders and a number of Nigerian states pledged their commitment to ending open defecation and investing in WASH.

In June, Hope Spring representatives and other WASH organisations was in a consultative meeting with the Mabushi toilet owners. This meeting was organised by Hub city innovative centre to discuss the issue of open defecation prevalent in the community. It was stated that in the entire community, there’s no household toilet except for public ones, which are in terribly bad condition, owned by some of the community leaders. Unfortunately, it’s easier to use by the men due to the method of construction.

Also as a result of the safety related issues revolving around the use of open latrines by women (e.g. fear of infection, fear of harassment).This made open defecation an undesirable option for the women. At the end of the meeting, the toilet owners were urged to improve their maintenance culture and a modern innovative toilet was recommended to the people.

In June, Hope Spring also organised a fundraising appeal for children of Jalala School Ilorin to help raise funds to build a borehole and a toilet for the children of this deprived school. In an interview with Ridwan in Ilorin, According to him, ‘ I have not used a toilet before’’, this is an injustice to this little boy who has lived all his life defecating openly.

Hope Spring Water has been trying it’s best to ensure Nigeria becomes open defecation free by 2025. Part of its work is to tell the stories of communities without toilets so that the government and organisations can come to their aid. Also Ogun State College of Health Technology and Hope Spring Water Water Charity Foundation are organizing a one-day workshop and Lecture Series themed ‘’Stopping Open Defecation, the roles of academia and public sectors in Nigeria’’ on Thursday 5th, December 2019. that will bring together Research and Development (R&D) experts in Academia and private sector players, to offer cutting-edge solutions to the open defecation menace in Nigeria.

To tackle the problem of Open defecation in Nigeria, Hope Spring Water also prepared a civil society statement calling the government to recognise the right to sanitation and water in the National Resources bill which is currently being reviewed. All Nigerian WASH members and partners are encouraged to sign the statement.

Lack of toilet has a hazardous effect on human health and the environment. According to Saka Yusuf from a community in Osun State, He appreciated Hope Spring for the Water and Toilets constructed for them. However, he stated that they needed two more toilets in their compound because people traveling often defecate openly which they have to bear and it’s really affecting the community. He appealed to Hope Spring to help them out with a toilet.

In commemoration of the 2019 world toilet day themed ‘’Leave no one behind’’ Hope Spring Water Charity foundation has taken it upon itself to construct a public toilet for this community as a way of reducing open defecation in the community. According to the project supervisor Ademola Ojo, he said Almost 50 million people in Nigeria practise open defecation. Apart from the dignity this takes away from people forced to answer the call of nature in this manner, it is a health hazard. According to UNICEF, 70,000 children under the age of five died in Nigeria, because of poor sanitary conditions like open defecation and unsafe water. As part of our contribution to World Toilet Day, we are building a toilet to help a community in dire need of it, in Osun State.”

In Nigeria quest toward achieving open defecation free state by 2025, there are a lot of things to be done. Lot of awareness programs on the evil of open defecation should be done especially in the rural communities so as to change the mindset of the people . Open defecation should be seen as bad and hazardous to the health and environment. Also the people with disabilities should be considered when making plans and decisions towards sanitation and hygiene so that no one will be left behind. The federal ministry of environment should also support and collaborate with organizations working in the Wash sector for a better improvement in sanitation and to ensure that all Nigerians have access to proper sanitation.