Episode 3: Water rights and water provision in Enugu amid Covid 19 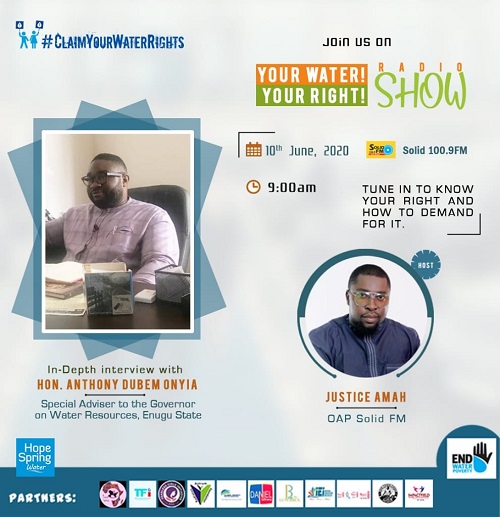 Episode 3 Your Water Your Right

Speaking on #ClaimYourWaterRights Ifeoma Okonkwo “explained that the advocacy is a sensitization campaign that mobilises people irrespective of their class, sex, tribe and gender to claim their water right”. The project is a global campaign supported by End Water Poverty and Hope Spring Water leading the campaign in Nigeria and Enugu being the pioneer state.

The vox pop played from the 3 communities interviewed in Enugu showed that the majority of the people lack access to safe water. The major source of water for the communities are wells and a stream. They pleaded for the provision of pipe-borne water from water board so long it’s affordable

The Ngenevu Community and whose source of water is a river acknowledged that there’s an abandoned state water project, they pleaded on the government to rehabilitate the project to ease their water difficulties especially during COVID period

He said Looking at the availability of water in the whole world, 70% of the Earth is covered by water out. of this 70%, only 2% of it is fresh with only 1% of the freshwater is accessible and the rest is locked up in snowfields and Glaciers. Water is needed to maintain hygiene, and ensure an easy hand washing process Unless we make water available diseases will continue to be with us.

As of the time we took off as the Ministry of Water Resources in August, 2007. We had a lot of challenges the challenges bothers on low capacity utilization, low manpower, low output, lack of coordination of the duties of the implementing agents. It was a big challenge. So, what we did was to begin to look at these problems.

Hon Onyia discussed the government plans towards making water available to Enugu people. He explained that water is a major priority for the Enugu State governor, Although the state doesn’t have enough production to give all the people in urban areas water even during this period of COVID-19.

An effort has been made by running 24 hours generator to make sure that at least five days in a week we pump water and the three isolation centres have uninterrupted water to ensure that water isn’t an issue to fight this pandemic.

We are in the first phase of this AFD project worth about USD50 million to revitalize everything. The scheme is targeted to last three and a half years, but we can’t wait that long before people start getting water.

To solve the problem of power supply in the distribution of water, the executive committee has approved the installation of a solar-powered borehole at 9th mile to ensure regular distribution of water. With the projection that it will be completed by early next year or at the end of December. This will increase water distribution capacity from 2% to 70%.

Also talking on the challenge of vandalisation and sabotage and how the corporation has tried to fix it. Hon Onyia said the major challenge they are having in given certain areas is water vandalisation where people steal pipelines or encroach by building on it. What they try to do is making the pipes unattractive

Another problem is drilling boreholes nearby which affects water schemes. The state water policy has been pushed to ensure that people present licence from the ministry of water resources before drilling borehole

Answering a question on if the government is taking the toll of engaging the private sector and the public-private initiative?

Hon Onyia said the government has partnered with Water Aid helping out with national policy and UNICEF trying to curb Open defecation in the state. We have a partnership with E-WASH.

We’re also doing a lot with other NGOs like South Sahara and other private sectors like Rotary, whom we’re trying to convince them to rechannel their funds from polio to WASH. These organisations have helped provide intervention to curb the spread of Covid-19.

If you were in that position, what would you do differently as someone who has been in the field who understands the current situation of the ministry?

Answering the question of what he would do differently if he were to be in that position understanding the current situation of the ministry. Engr Okeke Said

If I am in the position, I will insist on every agency in the ministry of water resources should have a good working plan that can guide implementation and accountability. Given the fact that we have more than 200,000 cubic meters possible sources of water in Enugu, I don’t see why water should be an issue in Enugu.

The #ClaimYourWaterRights team will be engaging in follow up to ensure that the abandoned Ngenevu water project is reconstructed. Ensure that the ministry of water resources proposed 9th mine programme is completed, engage with the state ministry of water resources on the progress made with the USD 50 million AFD funded project and follow up on the passage of the WASH policy into law by the state house of assembly.